Facelifts are a surgical procedure designed to eliminate or to reduce signs of aging in the face and neck. Sagging of the middle part of the face can create deep creases under the lower lid and between the nose and the upper lip (nasolabial fold), so the face looks tired and sad. Facial fat redistribution and loss of facial muscle tone can accompany sagging dewlap, the appearance of whiskers and neck wrinkling.

Although facelifts are designed to correct the signs mentioned above, this procedure is still highly individual because all faces age differently. Sometimes it might be appropriate to perform a lift of the middle part of the face only, while in other cases a traditional face-lift might be recommended. Often facelifts are performed alongside other facial procedures such as blepharoplasty, nose correction, fat grafting, injection of fillers and so on.

The traditional facelift includes a forehead lift, mid-face lift, and chin and neck correction. The surgery is performed through incisions made at the hairline at the forehead, temples and around the ears, so the scars are hidden well after they heal. At this clinic, facelifts are performed using an advanced endoscopic technique that allows us to perform the operation through even smaller incisions.

Usually patients return to work after 2-4 weeks, but it can take up to 6 months for the bruises to disappear and for the scars to finish healing. The cosmetic effect of a facelift can last for years or decades, but depends to a large extent on the patient’s lifestyle.

In the price of operation are included: 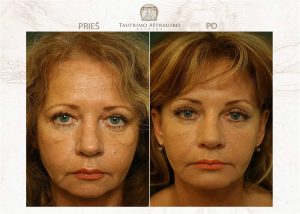 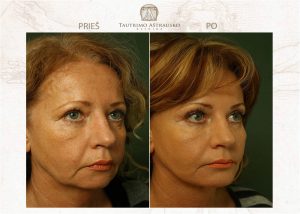